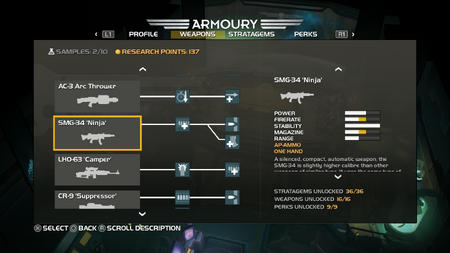 Helldiver troops are sent into battle with one primary weapon as well as a sidearm. There are 23 primary weapons to choose from in total, each falling into one of several categories depending on their characteristics, such as assault rifles or shotguns.

Unlocked weapons (from leveling or DLC) can be switched within their category by clicking on the large faint arrows right or left. These arrows are located on the weapon picture during weapon select.

The P-2 Peacemaker is the standard-issue sidearm and is always equipped unless the player selects one of three Perk sidearms.

Most weapons are unlocked when the player reaches certain Ranks, while others are made available at any Rank to players who purchase the relevant DLC Pack.

Every weapon (except for the three Pistol Perks and Saber) has multiple upgrades which can be purchased with Research Points. These can raise the weapon's efficiency greatly by increasing damage and magazine size; or provide unique bonuses like incendiary or armour-piercing rounds.

Additionally, some primary weapons are classed as one-handed. When mortally wounded, while carrying a Black Box/Power Core or when transporting an artillery shell, this trait allows players to continue to use primary weapons instead of being forced to swap to their sidearm.

On top of that, one-handed weapons are exceptionally easy to handle, allowing for a greater movement and turning speed when aiming down sights, when compared to conventional two-handed weapons.

These primary weapons and sidearms can be equipped before deploying to combat:

Players can also equip certain Stratagems which, during combat, allow them to call down heavy weapons (also known as support weapons or secondary weapons). These Stratagems must first be unlocked by successfully completing all missions on their associated planet or purchasing the relevant DLC. Players are only capable of carrying one heavy weapon at a time during combat.

Heavy weapons fall into several categories, with some (for example, the LAS-98 Laser Cannon) essentially being more powerful versions of certain primary weapons; while others have special attributes (for example, the TOX-13 Avenger's ability to slow down enemies) which can make them invaluable in some situations.

These heavy weapons can be requested during combat as Stratagems:

Grenades are thrown explosives which are mapped to a dedicated input. All Helldivers spawn with, and can only carry, two grenades at a time, but picking up Ammunition restocks all missing grenades. There are four types of grenades:

As is mentioned in the in-game tips, many weapons can be reloaded more quickly if the player reloads before emptying the full magazine. Fully emptying the magazine leads to a significantly slower reload time for those weapons.

Many weapons that let players perform a fast reload have an additional benefit: it retains a single round (bullet) in the chamber after changing out the clip (if it has not been fully emptied). This gives the player one additional round of ammunition in addition to the full clip inserted after reloading. This even works for the AC-22 Dum-Dum autocannon.

In lieu of magazines, weapons based on Laser and Arc technology use an overheat gauge and a charge-building mechanic, respectively. As such, neither the fast reload nor chambered round mechanics apply to these classes of weapons at all.