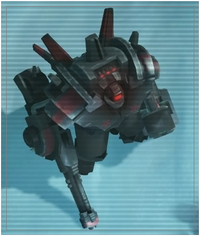 Nicknamed Warlords by the troops, these are massive beings putting the Hulks to shame. They are the absolute top of Cyborg society and formidable opponents, using their power to oppress and control their cybernetic subjects. These lords of war are the reason why Cyborg society needs our help to return to freedom.

* Item is part of a paid DLC pack.