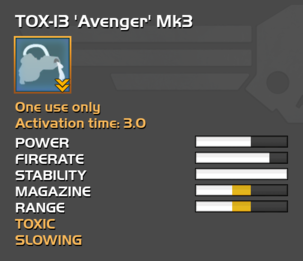 "A design very similar to the standard issue flamethrower, this high-pressure weapon dispenses a toxic sludge. The toxin causes heavy trauma to the nervous system and slows down afflicted individuals as well as causing brain damage. It was developed by Dr. Junko under the 2079 act of self-defence research and has been tested extensively on live targets. The TOX-13 is part of the Hazard Ops equipment kit."
- Armory Description

The TOX-13 Avenger is a DLC Stratagem, available at any rank to those who purchase the Hazard Ops Pack.