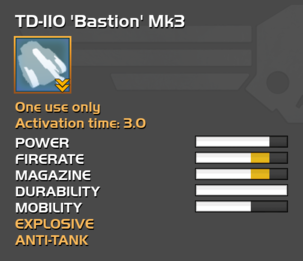 "A small, fairly mobile tank destroyer. Prized for its incredibly powerful main gun and large ammunition stores, this beast is a beautiful piece of machinery. Requiring two people to operate, a driver and a gunner, both members have to work together to get the most out of the 'Bastion'. The TD-110 is part of the Vehicles equipment kit."
- Armory Description

The TD-110 'Bastion' Tank Destroyer is a DLC stratagem, available at any rank to those who purchase the Vehicles Pack.