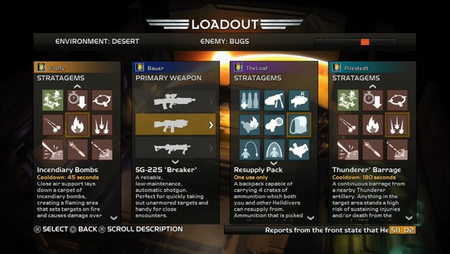 Stratagems refers to a wide variety of powerful ordnance and war matériel that Helldivers are able to call down from Helldiver Command during missions on enemy territory.

Each Stratagem has its own unique code consisting of a sequence of d-pad inputs between 3 and 7 button presses long which is used to request delivery (for a full list of these codes visit the Stratagem Codes page).

Every Stratagem has multiple upgrades which can be purchased using Research Points. Upgrades can greatly increase the efficiency and power of Stratagems by reducing cooldowns and call in times; improving anti-personnel attacks to anti-tank; as well as many other benefits.

There are several standard-issue Stratagems which are available to all Helldivers regardless of rank, such as Resupply and the MG-94 Machine Gun. Players can gain access to more by successfully completing all missions on a planet which offers a Stratagem as a reward or by purchasing one of the relevant DLC packs.

Each player can choose four Stratagems to bring on a mission in addition to any mission specific Stratagems granted by Helldiver Command - this is a crucial decision to be considered carefully as it is the Helldivers' greatest advantage over their foes.
Players should be aware that more than one of each Stratagem can be selected as part of their loadout.

Once the mission has begun the player is free to call down support at any time, however, as most Stratagems have a limited number of use(s) per mission and/or have a cooldown period that must be observed in-between uses, players are advised to plan ahead.
After the Helldiver has entered the correct code and placed the Stratagem Beacon at the desired location the Stratagem is delivered to the planet surface from a ship in orbit.

Stratagem Beacons can be deployed while piloting the Walker/Stomper, Obsidian and Lumberer Exosuits. A light on the right shoulder will indicate when a Stratagem is readied. Note that the beacon is always launched at the same velocity, unlike hand-thrown objects.

Stratagems are divided into four broad categories based on their intended use:

Note that the tables below are sortable by clicking on the headers.

* Item is part of a paid DLC pack.