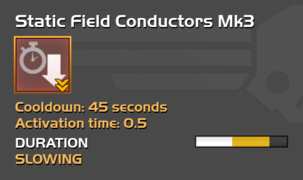 "The immediate area is covered in Static Field Conductors that shock nearby enemies, slowing their movement considerably. Certain enemies, such as vehicles and shielded units, are immune to the slowing effect."
- Armory Description

The Static Field Conductors Stratagem is granted to the player as a reward for completing all the missions on its associated planet (typically a medium-low level planet - difficulty 4 to 6).