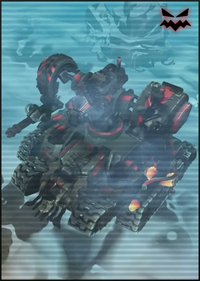 Cyborg Siege Mechs are the pinnacle of their perverse self-mutilating customs, it is even unclear if anything of the original human survives the process of being integrated into it. They are heavily armed, capable of deploying anti-air turrets and have the armor of a tank. It is recommended to bring heavy ordnance once facing these giant perversions.

Each enemy Master is randomly named by combining a name and a title.