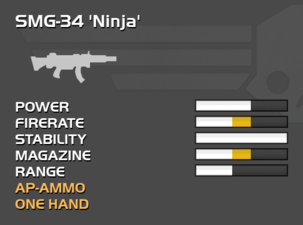 "A silenced, compact, automatic weapon, the SMG-34 is slightly higher calibre than other weapons of similar type. It uses the same type of magazines as other SMGs, but due to the higher calibre, they only hold 30 rounds. The SMG-34 is part of the Commando equipment kit."
- Armory Description

The SMG-34 Ninja is part of the the Commando Pack and is automatically unlocked by purchasing the respective DLC.