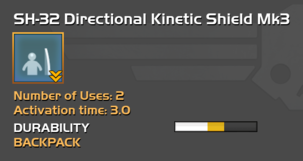 "A shield pack that projects a kinetically slowing shield in front of the user. The shield slows down projectiles and attacks, allowing Helldivers to take far more fire before having to get out of the way. Due to technical limitations, the shield covers only the front of the Helldiver. The SH-32 is part of the Entrenched equipment kit."
- Armory Description

Players must enter the following sequence, using the controller d‑pad, in order to call down this Stratagem up to two times per mission:

The SH-32 Directional Kinetic Shield is a DLC Stratagem, available at any rank to those who purchase the Entrenched Pack.