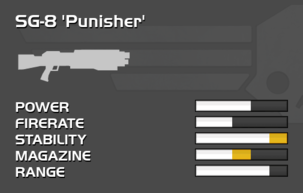 "The first shotgun used by the Helldivers is still in action by certain groups of soldiers. It has a low spread that can deal massive damage to single targets. A quirk compared to other weapons is that each shell has to be loaded manually as it has an internal magazine."
- Armory Description