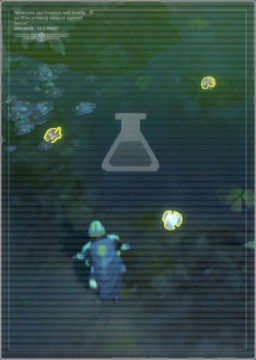 During combat on enemy territory it is possible to find and retrieve samples, which are randomly scattered around the map and appear more frequently during missions of higher difficulty. These samples are of scientific value to Helldiver Command and players are rewarded for their retrieval—every ten samples collected will grant a single Research Point which players can then spend in the armoury to upgrade their weapons or Stratagems.

The fully-upgraded Humblebee UAV drone can detect samples and will pinpoint them on the player's mini-map. Investing in this Stratagem early on is therefore recommended to boost the speed at which gear can be upgraded.

The number of samples in a mission is roughly dependent on the difficulty of the selected mission. Retaliation strikes and enemy masters have no samples.

Attack/defend events spawn additional 1, 2 or even 3 extra samples per mission.[1]

Research Points cannot be spent after upgrading everything in the armory, but will still accumulate, up to a maximum of 318 points.