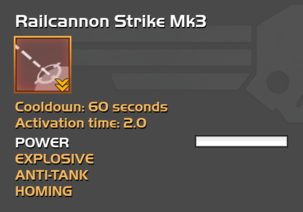 "A ship in orbit picks the largest target in a very close proximity to the beacon and fires a high velocity railcannon round at the target's predicted position."
- Armory Description

The Railcannon Strike is granted to the player as a reward for completing all the missions on its associated planet (typically a medium-high level planet - difficulty 7 to 9).