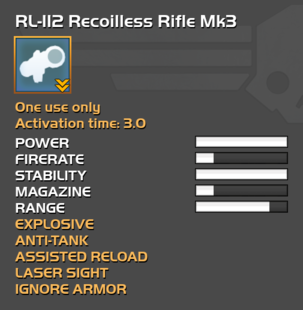 "A powerful multi-purpose recoilless rifle for taking out larger targets. The RL-112 is delivered with a backpack containing additional ammunition."
- Armory Description

The RL-112 Recoilless Rifle is granted to the player as a reward for completing all the missions on its associated planet (typically a low level planet - difficulty 1 to 3).