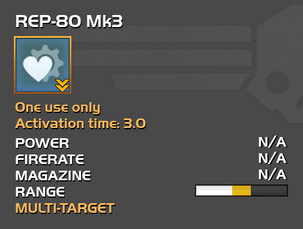 "This is a very versatile repair tool capable of repairing damaged vehicles as well as mending flesh. Helldivers proficient with the REP-80 are much loved by their comrades; no one enjoys to die."
- Armory Description

The REP-80 is granted to the player as a reward for completing all the missions on its associated planet (typically a medium-low level planet - difficulty 4 to 6).