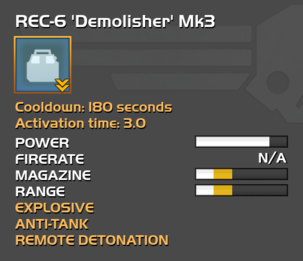 "The REC-6 Satchel Charge is an explosive charge with a handle, capable of being remotely detonated using the reload action at the time of the wielder's choosing. The explosion is powerful enough to take out objectives and most heavily armored enemies. The REC-6 is part of the Demolitionist equipment kit."
- Armory Description

Players must enter the following sequence, using the controller d‑pad, in order to call down this stratagem during a mission:

The REC-6 Demolisher is a DLC stratagem, available at any rank to those who purchase the Demolitionist Pack.