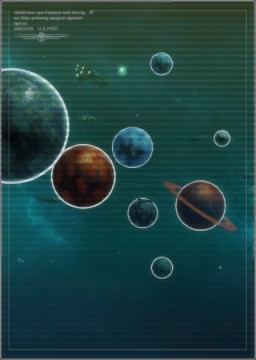 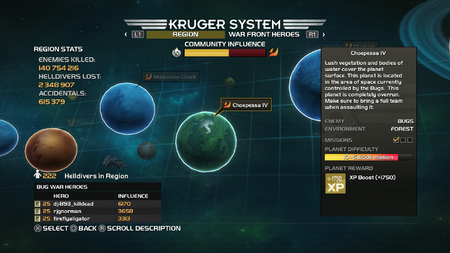 Selecting a planet through the planet selection console is the means by which Helldivers players choose the difficulty of their next mission(s). Players must first use the Galactic Campaign map to decide which enemy to fight (Bugs, Cyborgs or the Illuminate).

If the selected region's sector is not the homeworld sector (the last sector available in the region), they will then be presented with 15-17 different planets which are currently occupied by the enemy. Twelve of them, forming a horizontal chain, span the twelve standard difficulties (planets with identically-formatted difficulties in the following list pull from the same general pool of Stratagems when determining their planet reward):

In addition to the 15 main row planets, a sixteenth boss planet, possessing the Enemy Master difficulty, can be found below the main chain. If the sector's capital is under attack, a seventeenth planet (which can be found above the main chain) is the location of the Super Earth sector capital and holds repeatable missions against the sector enemy counter-attack.

In the base release, players could choose from planets with three possible environments: Snow, Desert or Forest (these are always the environments of the Cyborg, Bug and Illuminate homeworlds, respectively). The free expansion pack 'Turning Up The Heat' (released 12 May 2015) added a fourth environment: Volcanic. In addition to the normal environments, a final environment, City, is exclusively used for Defend Event missions (the missions to defend a sector capital or Super Earth itself). Each terrain type presents its own distinct difficulties or hazards that impact gameplay - for example, deep snow and swamps hinder player movement while volcanic eruptions can incinerate Helldiver forces (see Planet Hazards for more details).

If war against the chosen enemy is being waged on their homeworld, players will be presented with only the respective homeworld: Cyberstan for Cyborgs, Squ'bai Shrine for Illuminates, and Kepler Prime for Bugs. If, instead, the Helldivers' homeworld is under attack by the chosen enemy, players will be presented with Super Earth, a City-type planet which is the human homeworld. In both cases, the homeworld under attack offers repeatable missions against the selected enemy for double experience.

Each planet has specific weather, hazard sets, and missions associated with the environment biome of the planet::

Desert planets have very large open dunes with vast mountain ranges, deadly ravines boiling geyser pools with scattered dead decayed husks of plant and animal life. Desert planets with their open spaces allow Helldiver's to create elaborate defensive lines with Stratagems, use vehicles to their maximum potential, and have a clear line of sight nearly across their objectives. However, these can also be used to Helldivers peril as faster enemies such as Bugs (which certain units will jump in large open areas) or Cyborgs which use projectile weapons will also have a clear line of sight advantage. The Bug homeworld Kepler Prime is a Desert Planet.

Hazards associated with the Desert biome that will kill divers instantly are:

Snow planets are similar to Desert planets featuring open snowfields, frozen lakebeds, vast and scattered mountain ranges and open pools of exposed arctic water. Snow planets have the overall hinderance of reducing a Helldiver's movement speed while walking through the snow which will prevent them from sprinting and diving for cover at a reduced distance. Areas that offer reprieve from this mechanic are hard surfaces like frozen lakebeds, train tracks (train escort missions) and fabricated surfaces. This type of domain gives advantages to all enemy factions as it shares similarities with Desert planets. The Cyborg homeworld Cyberstan is a Snow Planet.

Hazards associated with the Snow biome that will kill divers instantly are:

Forest / Swamp planets are unique with lots of tree cover and random growth islands scattered around the area. Unlike Desert, Snow, and Volcanic planets Forest planets are sometimes drawn out in large branching hallway corridors compared to the large square maps sometimes increasing enemy interaction and making stealth attempts very hard or not feasible. Certain areas of Forest planets contain large marshes or bodies of water that will slow divers movement and diving speed which can make ventures for rewards (or fleeing enemy hordes) very risky. This type of domain gives advantages to enemies that can Jump, sector off escape routes, or corner players with vast numbers quickly. The Illuminate homeworld of Squ'bai Shrine is a Forest Planet.

Forest Planets have no instant kill mechanics and are relatively safe but trade off a high enemy contact ratio.

Volcanic planets, added in the DLC 'Turning Up The Heat' are similar to Desert planets but with new cosmetic changes and areas that present hazards to those who do not pay attention. Lava pools, volcanic eruptions, bottomless pits will make a unique experience while completing missions. Volcanic planets have no hindrance to Helldiver speed or mobility but often include instant kill mechanics very close or on top of mission objectives making completing tasks very dangerous. This type of domain gives advantages to fast mobile enemies, long range snipers, and movement limiting foes.

Hazards associated with the Volcanic biome that will kill divers instantly are:

Missions on City planets, including Capital Defense and Homeworld Defense missions, take place within ruined city blocks which must be navigated using roads passing between rows of damaged buildings. Bottomless pits can be found wherever these roads have been blown up by hostile munitions; other than these, the City biome has no lethal or inconvenient hazards. 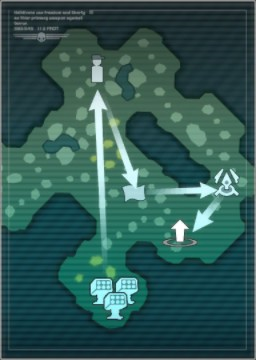 Regular planets consist of between 2-3 separate missions (the mission count depends on planet difficulty), each carried out on a procedurally-generated map populated with two types of patrols: hunter patrols (including units such as the Bug Stalker, Illuminate Hunter or Cyborg Hound) that will chase after and harass Helldivers; and scout patrols (including units such as the Bug Vanguard, Illuminate Observer or Cyborg IFV) that will call for reinforcements after spotting Helldiver troops. There is no limit to the number of reinforcements that can spawned by scout patrols during the course of a mission, but there is a limit to the number of reinforcements of each type which can be deployed at once --- these limits are determined based on the planet's difficulty and the number of Helldivers present.

Every mission features one to several objectives (randomly selected from the following list) which can be undertaken in any order but must be completed before Helldiver troops are allowed to leave enemy territory. Players should be aware that some of these objectives can be failed while still allowing the mission to be completed.

In-depth information about each objective type can be found here. Objectives can be divided into a few types:

* Objective can be failed.

The mission is deemed successful when all objectives have been accomplished and at least one Helldiver boards the extraction shuttle. If no Helldiver manages to board the shuttle then it will leave after a short time, however, it can then be called down again as normal by any surviving Helldivers. 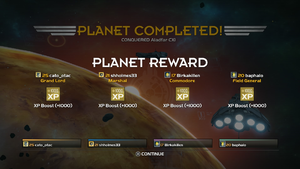 XP is awarded to every player that participates in a mission if at least one objective was completed successfully (regardless of whether the mission as a whole was successful), with the more difficult missions providing more experience points. However, the following factors will all reduce the amount of XP: failing objectives; failing to get one or more Helldivers aboard the extraction shuttle; and Helldiver deaths (reductions due to deaths stop once the death count has exceeded the difficulty number).

All XP contributes towards the players' experience, eventually allowing them to increase in Rank.

Once every mission on the selected standard or Enemy Master planet has been completed, the planet is deemed 'Conquered', and players are presented with the reward advertised in the Galactic Campaign interface. This reward is chosen on planet generation based on the following criteria:

Planetary Assault missions and Capital Defense missions will give double the amount of XP - this benefit is listed as the planet reward for capitals and homeworlds (which, due to their nature, cannot be conquered by typical means). Defeating an enemy Master will give up to three times the normal XP reward.

All successfully conquered planets also contribute Influence to the ongoing Galactic Campaign - this Influence is dependent on the number of stars awarded to the team at each Mission Completed screen for every mission on the planet. Helldiver teams must meet different criteria to be awarded each star and its associated Influence (each star usually gives a third of the difficulty number as Influence; if a non-integer total amount of Influence would be earned, the total is rounded up to the next integer):

Defeating an enemy Master will give 300 Influence Points (150 from mission completion plus 150 from planet reward) without regard to the number of stars earned, but can only be attempted when a Helldiver has earned at least 50 influence points from conquering standard planets in a certain quadrant.

For every 10 Samples picked up (and every time their Rank increases), players receive 1 Research Point.

Any Samples gathered by one player are shared with all other Helldivers in the team when they are picked up. Only one player needs to extract successfully for all team members to receive the Samples upon mission completion. All Samples gathered during a mission are lost if it is failed or aborted, if the player drops out or if they exit to the main menu before the post-mission stat screen appears.