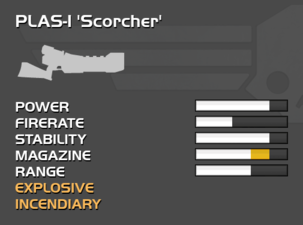 "The PLAS-1 Scorcher is the first ever Helldiver-issued plasma weapon. Super Earth engineers have gone to great lengths to provide a safe and reliable weapon, and the result is a rifle firing bolts of superheated gas. The bolts explode on impact or after travelling a certain distance, and can cause great anti-personnel damage. Part of the Weapons equipment kit."
- Armory Description

The PLAS-1 Scorcher is part of the Weapons Pack and is automatically unlocked by purchasing the respective DLC.