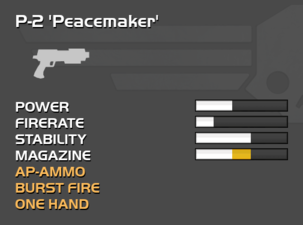 "The P-2 Peacemaker pistol is your average standard-issue sidearm. It fulfills the role of a last backup in case of ammunition shortage, and fills the void of a one-handed weapon if the Helldiver is incapacitated or carrying important objectives."
- Armory Description

The P-2 Peacemaker is the standard-issue sidearm available to all Helldivers and is already unlocked from rank 1 for new players.