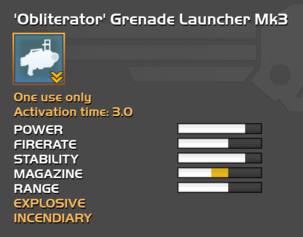 "The indirect fire grenade launcher fires impact-detonated rifle grenades at a high rate of fire. Is especially useful in tight spaces where there is a need to fire above teammates."
- Armory Description

The Obliterator Grenade Launcher is granted to the player as a reward for completing all the missions on its associated planet (typically a medium-low level planet - difficulty 4 to 6).