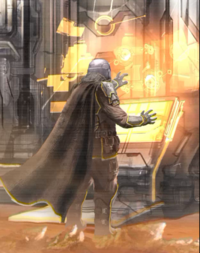 Operating a console is required for many mission objectives

In any given mission, a random selection of Objectives are assigned. Most objectives must be completed, though a few can be failed; failing an objective reduces XP and influence (stars) gained accordingly.

As with Stratagem Beacons, an active or threatened objective tends to draw a great deal of attention from enemy patrols. Whilst the degree varies from objective to objective, caution should be exercised. Prepare defenses before activating Launchpads or Geological Surveys, and be ready to fend off incoming enemies!

Some objective types may require you to search an area to locate them, with the size of the area varying from mission to mission, though the Humblebee UAV drone can reveal the location of objectives when upgraded.

There are two other ways to locate hidden objectives without the Humblebee UAV:

During a Retaliatory Strike, a large kill counter (with progress bar) will appear at the top of the screen.

Each faction has its own spin on this otherwise-simple task:

Helldivers will be provided with unlimited uses of the NUX-223 Hellbomb Special Stratagem until all 'Destroy' objectives in a mission have been completed. If you appreciate the Hellbomb for its other uses (such as luring enemies to it, creating chokepoints or crushing heavy enemy units), consider this when picking the order in which to complete objectives.

Alternatives to the Hellbomb[edit | edit source]

'Destroy' objectives can also be eliminated using most anti-tank weapons and Stratagems, such as (but not limited to):

Note that not all weapons and Stratagems are effective against all targets, particularly if the area of effect for their Anti-Tank or Explosive element is especially small. While the MLS-4X Commando can theoretically destroy objectives, its missiles require precise angle and distance as they do not home in on objectives; to make things worse, any nearby enemies will attract the missiles instead.

Also note that the only attack Stratagems capable of destroying a shielded Illuminate Beacon are the Thunderer Barrage and Shredder Missile Strike; the Missile Barrage's spread is random and it will occasionally manage it, but all other approaches require the Beacon's shield be disabled first.

Lone Cyborg AA Guns can also be found on most missions in Cyborg territory, and will project a small jamming field of their own. As the single AA Guns are not powered by generators that can be disabled, their radar jamming is only shut down when they are destroyed. For this reason, non-objective Cyborg AA Guns are not vulnerable to the NUX-223 Hellbomb or any of the Offensive anti-tank Stratagems: none of those can be used in their vicinity. Helldiver-carried anti-tank weapons remain a viable option.

Simple, in theory; 'Retrieve' objectives task you with recovering an item and bringing it to the randomly-placed bunker.

Whilst carrying the item in question, a Helldiver can only use one-handed weapons such as the P‑2 Peacemaker standard-issue sidearm, the SMG-45 Defender and MP-98 Knight SMGs, as well as the sawn-off DBS-2 Double Freedom shotgun.

There are also a variety of one-handed DLC-weapons on offer that present players who own the corresponding DLC-packs with viable choices for these objectives: P-6 Gunslinger, PLAS-3 Singe and FLAM-24 Pyro Perk-pistols (part of the Pistol Pack), SMG-34 Ninja (part of the Commando Pack) and the LAS-12 Tanto laser-powered SMG (part of the Specialist Pack).

The carrier cannot get into vehicles (nor store the objective in a free seat) or use Stratagem Beacons without dropping the box. Going prone or engaging the LIFT-850 Jump Pack will drop the objective where the Helldiver was standing. This can also be used to drop a Retrieve objective off at the bunker instead of using the Interact command ('X' on the PlayStation).

Retrieve objectives can be failed by dropping the item into an inaccessible area, such as a bottomless pit, lava pool, etc. (note, however, that these carrying-items can sometimes get stuck on the walls of bottomless pits without the game recognizing them as lost, making them completely unretrievable and the entire mission unsalvageable).

The above carrying mechanics also apply to the artillery shells players are required to locate and load to complete the Artillery objective.

There are two variations on the Escort objective: Survivors, and the Resource Convoy;

Care should still be taken around Survivors, as they are vulnerable to stray shots even from extreme distances (especially when using certain laser-powered weapons and sniper-rifles), accidental fraggings and similar mishaps. They can be knocked down (and helped up) just like Helldivers, and will eventually bleed out if not attended to.

Whilst Survivors are slow, unarmed, and have only minimal protection, they are oddly immune to most slowing hazards (such as deep water), as well as the effects of Airdropped Stun Mines and Static Field Conductors; they can also walk through an Illuminate Obelisk's wall and will even shrug off the effects of the control-reversing of Illusionists and Council Members.

Survivors will automatically die (despawn) if they are off-screen for too long, so it is important not to run too far ahead of the survivors and keep them at the edge of the screen at most. Whenever a Survivor dies (wether on- or off-screen), there is a noticeable audio-cue in the form of a "crunching" sound.

Once the Survivors have been "activated" (following a Helldiver), they can be told to stay still by interacting with one of them again. This way, they will not die when left off-screen, and no enemy patrols that spot them will trigger an alarm as long as no players are nearby. However, it is important to clear all hostiles when "parking" the survivors and leaving them behind because enemies will attack them as long as players are nearby (ca. 1 entire screen-length). Similarly, parked Survivors will be targeted by any enemies that appear on the screen once players return to pick up the group(s) of Survivors.

Any player can activate or deactivate any one group of Survivors, and they will always follow the player who activated them last.

It is sometimes necessary to search for the crash site when escorting Survivors. The fiery plane wreckage emits a crackling sound that can be used to find it, but you must be in the vicinity already. This is much less effective during Capital Defense missions, which take place in a ruined, smoldering cityscape that is littered with burning buildings.

It should be noted that Survivors are completely safe from enemies for as long as they are not interacted with by players. Once they have been activated or picked up from the ground (usually from damage caused by stray shots from Helldivers) all nearby enemies will start attacking the Survivors and raising the alarm.

There is a bug which can sometimes occur if Survivors are still active off-screen while one or more have already entered the bunker. This is triggered when the Helldivers move too far away past the bunker before the off-screen Survivor manages to get inside. The bug can lead to Survivors getting stuck outside of the playable area (still showing up on the map), which prevents the mission objective from being completed or failed with no Extraction possible. Therefore, it is good practice to make sure that all Survivors following you end up either safely inside or safely splattered before moving on.

The Convoy will halt if an enemy or Helldiver comes into extremely close proximity. It can be destroyed by friendly fire.

Hellpods cannot be dropped on the Convoy's rails. Any Stratagem that uses the Hellpod as a delivery system can be expected to land some distance away from the rails, even when the call-in beacon is thrown directly onto the rails.

On snow-covered or swamp-ridden planets, the Convoy's rails count as normal terrain. Helldivers without All Terrain Boots can exploit this to improve their mobility.

There are several variants on this type of objective:

Note that enemy patrols will raise alarm when these objectives are active and players are defending them. For this reason it is recommended to protect these structures evenly from all sides and to regularly check the map for patrols and enemy movement in order to prevent being caught off-guard by hostiles.

Attention, Geological Surveys can be destroyed if any hellpods hit the exact same spot where Survey landed.

All other Deploy objectives (other than the Artillery) will revert to their base state if left unattended for too long, but otherwise cannot be failed.

Using the wrong input will cause the shell to explode; this is instantly lethal to any Helldiver who is not wearing an SH-20 Shield Generator Pack or protected by the Displacement Field Perk, and can kill any nearby Helldivers (or enemies) too. However, it is possible to avoid death or even damage by quickly leaping away from the shell as it explodes. This manoeuver requires to be positioned at the edge of the shell, as well as extreme reflexes to pull off correctly.

Undetonated explosives cannot be set off by gunfire, grenades, or other explosives; even a Shredder Missile Strike won't set them off.

The area that must be searched (and number of explosives) increases with difficulty. Even if none of the explosives are disarmed successfully, as long as they have been disposed of, the objective is a success; no XP is docked if any have accidentally been set off.

An achievement/trophy can be earned if the player kills either an Illuminate Council Member or a Bug Brood Commander by running them over with the M5 APC or M5-32 HAV; using the TD-110 Bastion will not work.

Assassinate targets will roam around like a scout patrol, but their objective icon follows them wherever they go.

In solo play, dying will drain most of the capture bar until the auto-reinforce Hellpod has touched down.

When enemies are within the capture area, the capture rate is greatly slowed (but not completely halted) and the text over the flag will change to 'Clear Area' until all enemies too close to the objective have been neutralized. Capturing these objectives can therefore turn into a grueling ordeal if the alarm is raised and enemy troops start to deploy in large numbers. Keeping patrols from spotting you while you are capturing the objective is advised, especially on higher difficulties. Attempting a capture objective while being tailed by a horde of alerted enemies is not.

On swamp worlds, these flags have a high chance of showing up surrounded by areas of water which decreases the Helldiver's mobility unless they happen to be equipped with a LIFT-850 or the All-Terrain Boots.

During this time, enemy patrols will swarm towards the extraction beacon in force from across the entire area of operations; scouts should be swiftly eliminated to prevent stronger enemy forces from being called in and potentially jeopardizing the extraction.

Once the shuttle lands, the team has approximately twenty seconds to get aboard before it takes off again. Whilst Extraction cannot be failed, XP and Galactic Campaign influence are reduced if Helldivers are left behind, so it is important to make sure everyone makes it on board.

Note that if no player boards the shuttle it will simply lift off and another shuttle can be called at the extraction beacon. There is no known limit to how many Shuttles can be called in.

The only exceptions to the 90-second Extraction waiting time are: