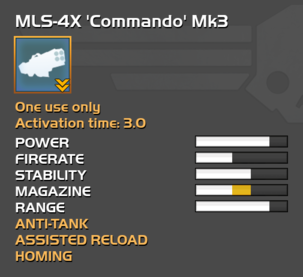 "The 4X Missile Launcher System is a shoulder carried, multiple missile system. It launches four heat seeking missiles that try to home in on targets and eliminate them. The MLS-4X is part of the Commando equipment kit."
- Armory Description

The MLS-4X Commando is a DLC weapon, available at any rank to those who purchase the Commando Pack.