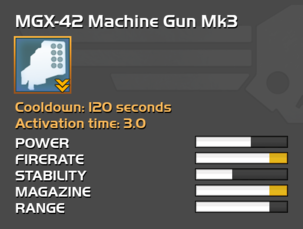 "The MGX-42 is a magazineless, one-use, disposable machine gun designed to be discarded after having fired its ammunition. The 300 rounds of caseless ammunition are stacked in the multiple barrels and fired electronically making the weapon almost void of mechanical parts and cheap to manufacture."
- Armory Description

The MGX-42 Machine Gun is unlocked by completing a level 13 Bug planet.