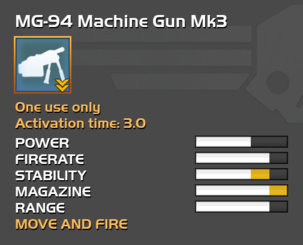 "The MG-94 is a rapid-fire machine gun used to achieve fire superiority. On average, it is about as powerful as an assault rifle but with a substantially larger magazine."
- Armory Description

The MG-94 Machine Gun is a standard-issue Stratagem, available to all Helldivers regardless of rank.