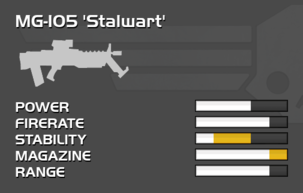 "The MG-105 is a light machinegun filling the role of fire support without being as heavy as an MG-94. Due to its lighter weight, the initial spread is quite wide, but the weapon is easily controlled once the user settles into the recoil. The MG-105 is part of the Demolitionist equipment kit."
- Armory Description

The MG-105 Stalwart is part of the Demolitionist Pack and is automatically unlocked by purchasing the respective DLC.