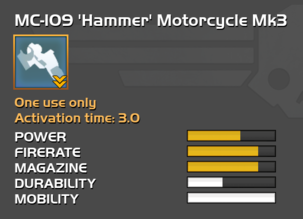 "A sturdy combat motorcycle complete with sidecar. This vehicle is excellent for Helldiver units that want to get around fast. Though lightly armored, it has superior speed and agility compared to the vehicles usually found in the Helldiver arsenal. The MC-109 is part of the Vehicles equipment kit."
- Armory Description

The MC-109 'Hammer' Motorcycle is a DLC stratagem, available at any rank to those who purchase the Vehicles Pack.