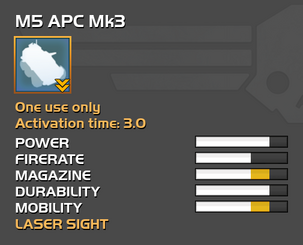 "The M5 is a 4-seat armored personnel carrier equipped with a double barrel light auto-cannon and two smaller support weapons. It traverses snow and shallow water with ease."
- Armory Description

The M5 APC (Armored Personnel Carrier) is granted to the player as a reward for completing all the missions on its associated planet (typically a medium-low level planet - difficulty 4 to 6).