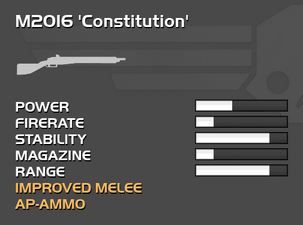 "The M2016 'Constitution' is a reproduction of the old M1903 service rifle used in ancient times. It is fairly ineffective in combat but is used within the Super Earth Armed Forces as a ceremonial rifle. Every citizen is issued one once they turn 16 to encourage service."
- Armory Description

The M2016 Constitution was given for free to all players regardless of rank to celebrate Liberty Day on on October 26th 2016. It is unlocked by default for new recruits so long as the latest version of the game is used.