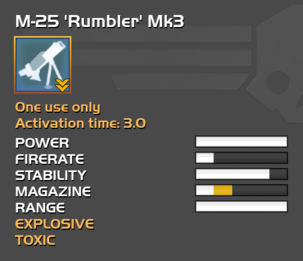 "The Rumbler portable mortar is a heavy piece of equipment and very clunky in its operation. Its clunkiness is tolerated however, mostly because of its immense firepower, but also because it is a variable distance indirect fire weapon. The Rumbler is part of the Weapons equipment kit."
- Armory Description

The M-25 Rumbler is a DLC weapon, available at any rank to those who purchase the Weapons Pack.