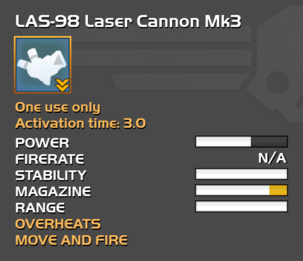 "This cannon is built on upscaled, weaponized laser technology. It fires a heavy, continuous laser beam that consumes no ammunition unless it overheats. The weapon needs to be loaded with emergency heat dump canisters to fire."
- Armory Description

The LAS-98 Laser Cannon is granted to the player as a reward for completing all the missions on its associated planet (typically a medium-high level planet - difficulty 7 to 9).