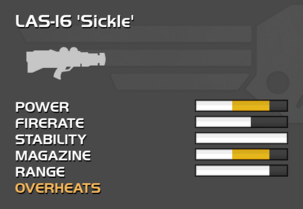 "This carbine is based on laser technology but modified in an attempt to get something more similar to a conventional assault rifle. It fires short laser bursts and builds up heat more quickly than the LAS-5 Scythe. The trade off is higher burst damage but a shorter firing time. The LAS-16 is part of the Support equipment kit."
- Armory Description

The LAS-16 Sickle is part of the Support equipment kit and is automatically unlocked by purchasing the respective DLC.