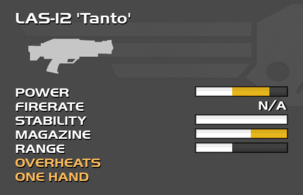 "This is an attempt to pack a laser into a small enough housing to be used for the same applications as conventional submachineguns. The result is a laser with a fixed focus step, allowing for high power at a very limited range. It was never widely used as the range limitation was considered too much of a drawback. The LAS-12 is part of the Specialist equipment kit."
- Armory Description

The LAS-12 Tanto is part of the Specialist Pack and is automatically unlocked by purchasing the respective DLC.