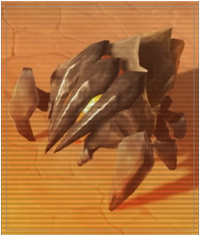 The Impaler is a very different threat compared to the other bugs, it burrows its head in the ground, and tunnels its tentacles so that they burst from the ground in close proximity to its target. The tentacles are very dangerous but the creature also exposes a weakpoint when burrowing them, something that implies a lack of self-preservation.