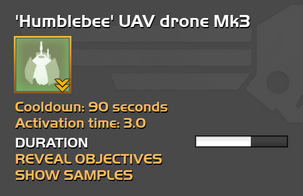 The Humblebee UAV drone is a DLC Stratagem, available at any rank to those who purchase the Ranger Pack (available for free as part of a limited edition Helldivers bundle until 28th April 2015, now available as a paid DLC).

Alternatives to the Humblebee[edit | edit source]

Some objectives may require you to search an area to locate them, with the size of the area varying from mission to mission, though the Humblebee UAV can reveal the location of objectives when upgraded. There are two other ways to locate hidden objectives without using the drone: