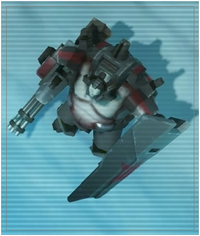 Massive men completely encased in metal wielding the most awesome firepower the Cyborgs can muster. These enemies are tough but their spirit has long since been broken.

These Hulks are what most Cyborgs strive to become, yet few reach this grotesque goal.

Hulks are heavily armoured at their sides and rear; conventional weapons are only effective against their unarmoured torso. However, aiming at that location for too long will cause the Hulk to raise its large shield to protect itself - making it immune to conventional weapons but also immobile and incapable of firing for the duration.
Allowing the Hulk to fire will afford players an opportunity to target its unprotected torso, as long as they can avoid the weaving gatling gun attack.