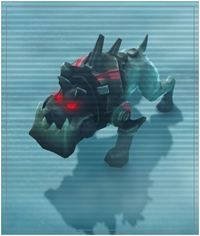 The Cyborg Hounds are twisted rabid versions of man's best friend, enslaved by the Cyborgs. Very fast, they tend to go for downed targets and try to finish the job. Fortunately they are lightly armored and go down easily with a bayonet stab.