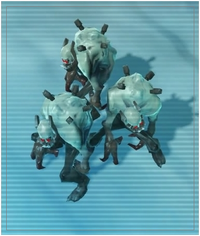 The Grotesques are as the name implies, very grotesque. Believed to be Initiates fallen in battle, too wounded to recover, regrown into mindless beasts capable only of rushing headlong against the enemy.

A true testament to the vile nature of the Cyborgs, killing them is doing them a favor, ending their non-life.