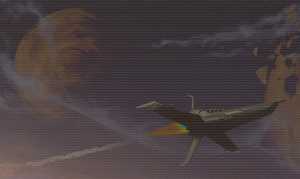 It is capable of aerospace superiority fighter operations, as well as performing precision ground attack operations in support of Helldiver surface missions.

The Eagle's ordnance payload is modular and can include a variety of direct fire cannons, guided missiles, or various guided bombs. However, loiter duration, flight performance envelope, and rearming time can vary significantly depending on the type of weapon load delivered to the target area.