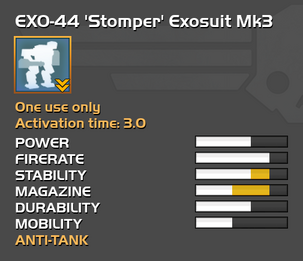 "The pinnacle of Helldiver weaponry; the EXO-44 is a manned walker armed with the MG-11 minigun and eight anti-infantry homing missiles."
- Armory Description

The EXO-44 'Walker' Exosuit is granted to the player as a reward for completing all the missions on its associated planet (typically a medium-low level planet - difficulty 4 to 6).