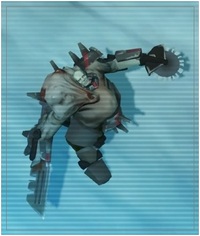 Believed to be the surgeons performing all the Cyborg implantations, the Butchers are fleshy monstrosities capable of soaking immense amounts of damage in their hinged-on flesh. There are even reports of Butchers taking a recoilless rifle round to the chest and still keep on coming. They will close to melee range as fast as they can to try to engage with their heavy melee weapons.