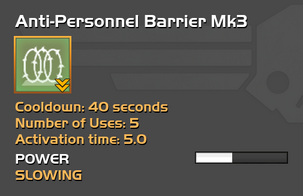 "A barbwire barrier delivered via airdrop. The barrier is very effective at slowing down incoming enemies and is a semi-permanent solution great for when you need to hold ground for longer periods. The Anti-Personnel Barrier is part of the Entrenched equipment kit."
- Armory Description

Players must enter the following sequence, using the controller d‑pad, in order to call down this Stratagem up to five times per mission:

The Anti-Personnel Barrier is a DLC Stratagem, available at any rank to those who purchase the Entrenched Pack.