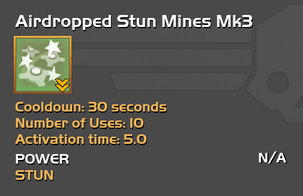 "Calls in a carpet of self-arming, self-burying stun mines. Anything that walks over them will set them off, and when a mine explodes it stuns everything in a small area. Some enemies are immune to the stunning effect, such as vehicles and shielded units."
- Armory Description

Players must enter the following sequence, using the controller d‑pad, in order to call down this stratagem up to five times per mission (ten if upgraded):

The Airdropped Stun Mines stratagem is granted to the player as a reward for completing all the missions on its associated planet (typically a medium-low level planet - difficulty 4 to 6).