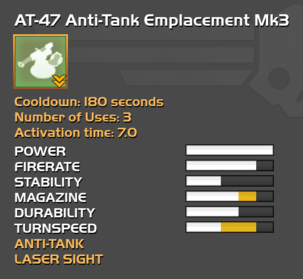 "A well armored anti tank emplacement that has to be operated manually. Early versions had the same automated AI as the current generation turrets, but it was deemed too volatile. Very good at destroying armored enemies. The AT-47 is part of the Entrenched equipment kit."
- Armory Description

The AT-47 Anti-Tank Emplacement is a DLC Stratagem, available at any rank to those who purchase the Entrenched Pack.