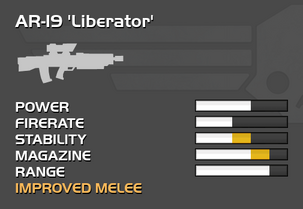 "Fully automatic assault rifle. Reliable and powerful, it is good for dealing with most threats."
- Armory Description

The AR-19 Liberator is the standard-issue service rifle available to all Helldivers and is already unlocked from rank 1 for new players.