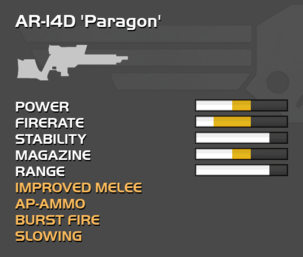 "The AR-14D Paragon is in reality an old assault rifle rarely seen in use amongst the armed forces. It uses the same cartridge as the AR-20L Justice but in a heavier, semi-automatic rifle. The rifle has been modernized and now fires a poison-laced round causing targets hit to spasm and slow. Part of the Hazard Ops equipment kit."
- Armory Description

The AR-14D Paragon is part of the Hazard Ops Pack and is automatically unlocked by purchasing the respective DLC.