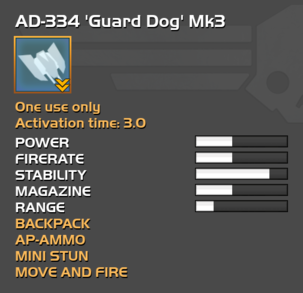 "The AD-334 Guard Dog is a defensive automated drone armed with a small submachine gun. It is based from a backpack carried on the Helldivers back and will land there to rearm whenever it runs out of ammunition. The AD-334 is part of the Defender equipment kit."
- Armory Description

The AD-334 Guard Dog is a DLC Stratagem, available at any rank to those who purchase the Defender Pack.