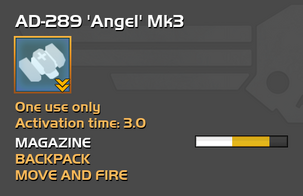 "The AD-289 Angel is a support drone capable of healing injured Helldivers that are nearby. It has limited supply of the regenerative substance and must land in the backpack to refill when it runs out. The AD-289 is part of the Support equipment kit."
- Armory Description

The AD-289 Angel is a DLC Stratagem, available at any rank to those who purchase the Support Pack.