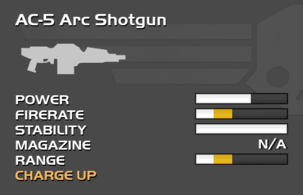 "The AC-5 uses the same charge building setup as the AC-3 but instead of discharging at a specific target, it tries to saturate an area in front of the user with electricity. This application has limited range, but the damage output is enough to completely fry light and medium targets. The AC-5 is part of the Pilot equipment kit."
- Armory Description

The AC-5 Arc Shotgun is part of the Pilot Pack and is automatically unlocked by purchasing the respective DLC.

As it is an Arc weapon, the AC-5 does not require any ammunition to fire.