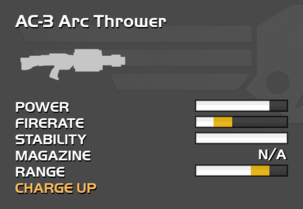 "The Arc Thrower projects an arc of lightning that follows the path of least resistance. The weapon can be charged up for a more powerful effect."
- Armory Description

As it is an Arc weapon, the AC-3 does not require any ammunition to fire.