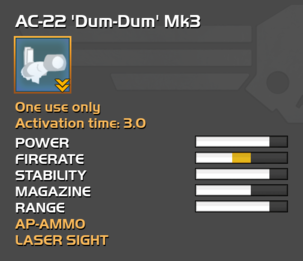 "This 20mm Autocannon is a staple of Helldiver weaponry. Usually reserved for APCs and other vehicles, this is a shoulder carried version for the Helldiver on foot. It is an extremely bulky weapon, but performs very well against medium-armored targets. The Dum-Dum is part of the Weapons equipment kit."
- Armory Description

The AC-22 Dum-Dum is a DLC weapon, available at any rank to those who purchase the Weapons Pack.

Helldivers start with 3 magazines of Dum-Dum ammunition, and can carry up to 6. Each magazine contains 20 rounds. If 4 or less rounds remain in the magazine when the weapon is fired, the 'low ammunition' warning sound will play.