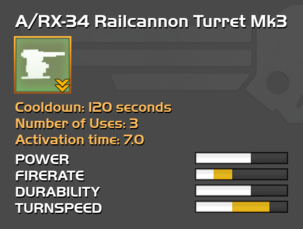 "Call in an automatic railcannon turret to help you out. The turret is capable of distinguishing friend from foe, but be careful with its unstoppable rounds."
- Armory Description

The A/RX-34 Railcannon Turret is granted to the player as a reward for completing all the missions on its associated planet (typically a medium-low level planet - difficulty 4 to 6).